Voice Over Casting Websites Suck, But I’m Thankful for One.

It seems to be the in thing to bash any website that tries to connect voice actors with new clients. I mean why do we need supermarkets? When we could all just go out and individually gather food? Why do we need airlines, when we could just drive?

Why do voice actors need websites to help them find more work?

Because clients want to be given options when hiring a voice actor. They want the invoicing system and payments simplified. They want to cast a voice easily and conveniently. They want a selection to choose from.

I’m not just making this up, these facts are coming from speaking to thousands of voice over clients, finding out what they want and what they need to make their job easier.

But it’s not all about the clients; it’s about what works for the voice talent as well.

Many voice actors I speak to don’t enjoy chasing up invoices and dealing with negotiations of rates, or bidding against their peers to get the job. They just want to get a great script, record and get paid.

These websites streamline the process. But they don’t fit into the same basket. That would be an uneducated assumption to believe that each website operated in exactly the same way as their competitors.

The one thing they all have in common is that they connect clients and voice actors. The same thing that traditional agents do.

If you don’t like the way that a certain site operates, then don’t join them, don’t support them by paying their fees. Bitching through online forums just makes you look bitter and twisted. Proclaiming that you have never booked a job through one of these sites suggests that maybe the problem is you and not the websites.

The voice over industry has changed. The use of voice actors has changed. There are no longer only a small handful of TV networks or radio stations. There are now thousands. In turn there are more jobs, and because of technology and the number of voice actors competing for the jobs, obviously the rates have had to slightly come down as well. This is completely normal in any industry.

The Voice Realm launched in March 2012, to offer an alternative to websites where any ‘voice actor’ (or plumber) could sign up so long as they had a credit card number.

The site only lists professional talents with pro demos and a track record of working with noteworthy clients. In just over a 12 month period the website paid out over $1,000,000.00 worth of jobs to voice actors.  Talent are being auditioned and booked daily by companies such as American Express, Taco Bell, Kaplan Education, Playboy Online, Pepsi and thousands more.

Selling subscriptions to voice talent is not our priority. In actual fact we add a few little hurdles to sort out the professionals from the amateurs. There is a $99 yearly listing fee, and then 15% commission for each job booked through the site.

I’m proud to work for a company that offered an alternative to what was available. I’m thankful for every opportunity to support and work with advertising agencies, production companies, small business who have never cast a voice actor before, and of course all the professional voice actors listed at The Voice Realm. 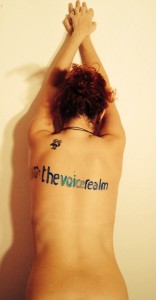