Let us first note that Film Noir is not a genre. Rather, it is the style, the point of view, the mood, or tone of a film. Filmsite.org fully defines it as usually referring to a distinct historical period of film history, specifically to the decade of film-making after World War II, a period that is likened to the German Expressionism or the French New Wave periods. The term Film Noir was coined by the French film critics, Nino Frank the first among them in 1946. The term translates to ‘black film or cinema.’ They noticed the dark, downbeat and black looks and trending themes that were of American crime and detective themes. It was after World War II that these films were released in France. These films often mirrored the consequential tension and insecurities of post war era where fear, paranoia, weariness and distress permeated the air people breathe. It made the violent, misogynistic, violent and greedy outlook of anti-heroes of Film Noir. It became the metaphor to society’s evils and symbolic of the undercurrent moral conflict and sense of injustice. Noirs rarely had happy and optimistic endings which became its appeal.

More often than not, the plot of a Film Noir evolved around a cynical, hard-hearted, disillusioned male character accompanied with a narrative voiceover. Narrative Innovations in Film Noir published by moderntimes.com provides us with an example where Fred MacMurray as Walter Neff in Double 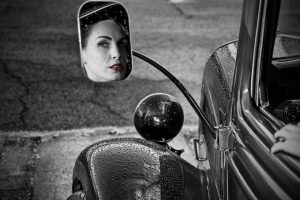 Indemnity arrives at his office in the middle of the night and delivering into a dictating machine his confession for killing a man— for money (pause) and for a woman… He would then have occasional flashbacks throughout the film that are narrated by his voiceover confession. Another example by the article is Detour where the male protagonist’s voice over (Tom Neal) persistently addresses an impersonal “you” giving the spectator the impression that he or she is the person spoken to–and assumes that the listener is smug, unsympathetic, and unbelieving. The cynical male character then meets a beautiful but promiscuous, double-dealing and seductive female with no moral standards who would use her sexuality, her feminine wiles to – driven by her ambition – manipulate the male character to do what she wants which is often to make him her fall guy, and often following a murder. Betrayal, double crossing and glimpse of how they became the way they are with the women usually destroying themselves to save the hero’s life. Women back in the 1940’s were still grasping their new found independence as they were given better job-earning power in the homeland during the war. Probably not used to this, the woman was still portrayed as suffering on screen.

Narrative Innovations in Film Noir describes voiceover and flashback as the persistent style and narrative elements of Film Noir. While Double Indemnity carefully clues the spectator in as to who is speaking, when they are speaking, and from where they are speaking, other films use voiceover and flashback temporarily and more ambiguously. So much so that audiences often need to inquire about the motives of narrative voices, how much they know and whether they are telling the truth, when and to whom they are speaking. At any rate, Film Noirs encouraged the brooding, thoughtful personalities among its audiences. A weary post war population was the perfect breeding ground for this style of film.

Mostly shot in gloomy shades of gray, black and white and thematically allowing the display of the dark and inhumane side of human nature coupled with cynicism and doomed love, these films also emphasized the brutal, unhealthy, shadowy, dark and sadistic sides of human experience. Be that it may be, Film Noir has become an art, a style that audiences in the modern era yearn for and is being shown even today. The voiceover narration and the brooding scenes are a stark contrast to today’s film types with their loud accompanying music, psychedelic bright scenes and crass dialogue are almost garish next to a Film Noir.

Who would be your favorite Film Noir voiceover narrator?