Lend Your Voice to Charity 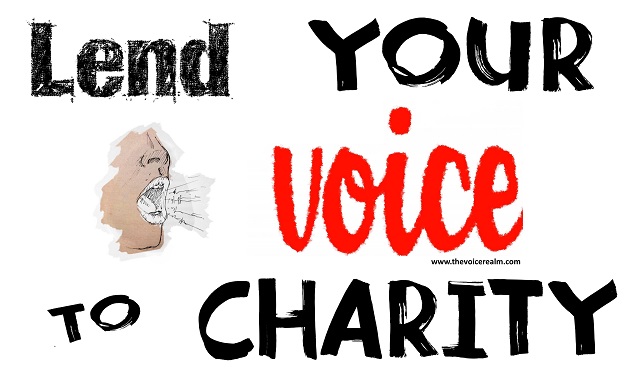 At one point (or maybe more) as a voiceover actor you have lent your voice and talent for free. Like Reiko Kajiwara doing free interviewer and program hosting duties for her local Japanese Community in Canada; or maybe as simple as doing a voiceover for a young fan for his school campaign like what Kevan Brighting did for Joshua Todd; or Marcia Bennett doing one of her character voices for an innovator of science education. No matter what is, big or small, we would always hear stories of the generous heart of the people in the voiceover community.

But what if you can give voice to the voiceless? What if you can donate your voice to give a speech-impaired recipient their own vocal identity, would you do it?

Stephen Hawking, maybe the most famous personality to use the text to speech technology to communicate, used the same system for over 20 years until its recent upgrade last year.  Robotic as it may sound, it is uniquely Stephen Hawking.  The technology used is so outdated, that it cannot be replicated, so much so that Hawking considers it now as his own voice.

There are millions more severely speech-impaired people who rely on text-to-speech systems, however their voice is lost in the millions of the same robotic sound – from machines manufactured by the lot.

One speech-science professor aims to change that. Rupal Patel, a professor at Northeastern University, found out that people with dramatic speech impairment, were still able to control the melody of their voices (also called the “prosody” of a voice, or its pitch, tempo, and volume) even when they couldn’t form words.  During a speech-technology conference in Odese, Denmark back in 2002, she observed that nearly half of the room who were using the same text-to-speech system sounded all alike. She then thought, “If they have this part of their voice that’s preserved (prosody), maybe I would be able to build a voice for them.” With a grant from the National Science Foundation, VocaliD (pronounced “vocality”) was born.

According to their site, they use a “cutting-edge technology” that blends the voices that gives the recipients “vocal identity that is both authentic and understandable.”  To do so, they rely on donors who donate their voice. Since last year, they have about 500 to 600 people in their voice bank, but more is needed for their database.  A recipient’s voice characteristics needs to be matched with a donor. Patel says, “In the past, we were doing some really (basic) matching, like age and gender. We’re developing some new techniques to do more sophisticated matching for the kind of voice you have. Taking into account things like ‘voice quality’, or hoarseness, regional accent; and height and weight, both of which affect the vocal tract.” The result is a hybrid voice that preserves the clarity of the donor’s recordings but conveys as much of the recipient’s vocal identity as possible.

With about 2.5 million people in America alone who are severely speech-impaired due to various conditions like head injuries, congenital disorders like cerebral palsy, or degenerative diseases like ALS, it would take more than 600 voices to help them out.  All it takes is about three to four hours of speech recording and it need not be done in one seating. No acting needed, no special characters to create – just your normal speaking voice.  And who better can give a clear, understandable reading but the people who do it for a living?

Voiceover actors would always look for opportunities to get that prized project or that sweet deal, but it is not all about the money or getting ahead in this industry, some of the best and most memorable projects are maybe the ones that were done for free.

Would you share your voice to the voice bank? Have you ever lent your voice to a non-profit or a cause? Share with us your inspiring story.