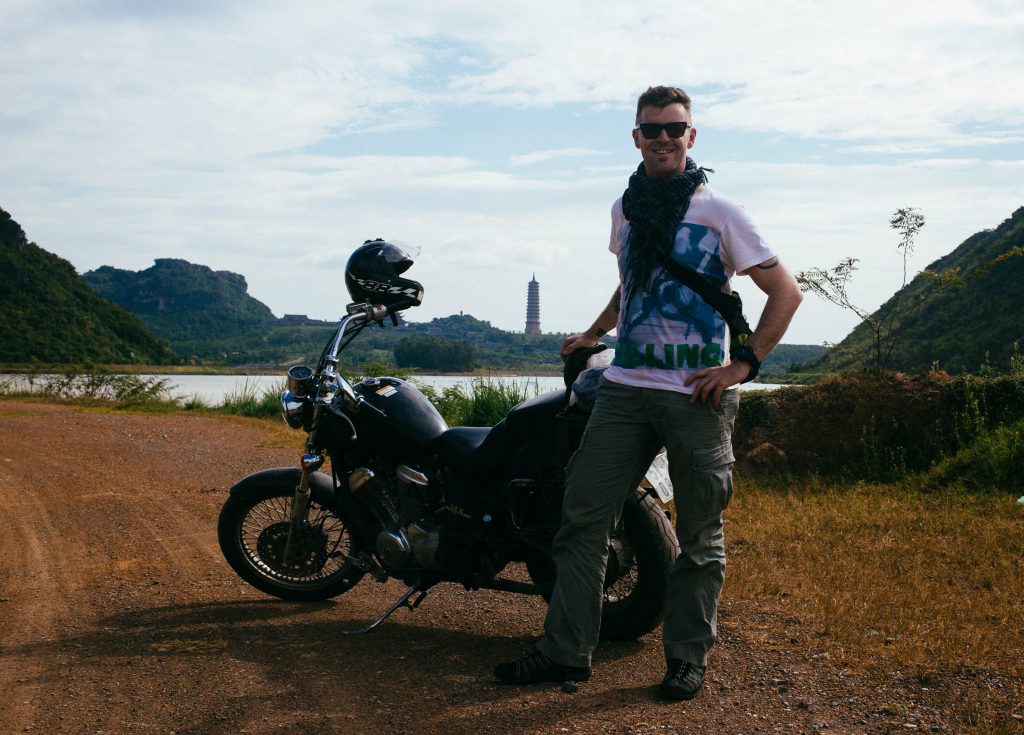 Adam found his “voice” in a not so usual, usual way…

Like most voice over talents, someone “discovered” that he has a great voice fit for voice over work, but what was unusual was that he just moved into a strange country almost 7,000 miles from home, hoping to get a new start and maybe a life changing experience… so I guess that’s what we can call destiny.

Let’s have Adam tell his story…

Discovering his Voice and South Korea 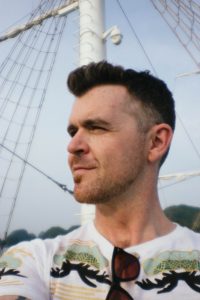 My name is Adam Lofbomm. I’m originally from Nashville, TN, but I have lived in Annapolis, Boston, San Francisco, South Korea for 9 years, and now am a proud resident of Chicago.

I’ve been working full-time in VO going on ten years now, but before that, in my teens and early twenties I did all kinds of different jobs, from washing dishes and construction, to installing surveillance systems and wiring multi-million dollar pro audio studios in Nashville, my hometown. One of my favorite jobs before voice over was waiting tables in fine dining restaurants. It was such a great way to gain people skills and build confidence in communicating effectively.

Before making the decision to move to Seoul, my ex and I were both doing the 9 to 5 office job thing. We live comfortably, had the house and two cars, but we asked ourselves, “We’re 26 years old, is this going to be it for us? We’ve always wanted to travel. Let’s go try teaching in Asia!”

She had a job lined up and I went along to hoping to find something once we got there. The recruiter who hired her invited us to dinner one night soon after our arrival. As it turned out, his wife worked in educational publishing and during our conversation she stopped suddenly and said, “You know what? You’ve got a great voice – we could totally use someone like you for our recording projects!” The next thing I know, she introduced me to the studio owners, and they started calling me back directly. And within four months, voice over work became a full-time gig.

For a number of years, the work was incredibly steady there. There were only about 40-50 of us that were working full-time at any given time, but our agents were sending us 25-35 hours of on-mic work per week for about seven years.

The pay was often a third of what they were paying in the States (I used to refer to the work there as “sweat-shop VO”), but the volume was very high and steady, and we never had to audition. The clients hire based on your agency-provided demo alone. It was a tremendous way to get on-the-job training.

During my nine-and-a-half years there, I figure that I logged almost 10,000 hours of recording in just about every segment imaginable: educational, documentary, commercial, corporate narration, audiobooks, animation, video game, ADR/dubbing, you name it! They really did throw us into anything and everything, so it certainly helped develop my range in a way I doubt I could have done in the same amount of time stateside.

(FYI, for those readers about to book a one-way flight to Seoul, there was an unfortunate downturn in the volume of work there in the last two years, and all but a few stalwart actors have since jumped ship (including me).)

It was a great way to stretch and grow myself, but nowadays I’m focusing my efforts toward the Narration, Commercial and eLearning segments, where I feel I have the most value to offer my clients. I’ve always been a lover of language, avid reader and collector of books, so I wake up every day amazed and grateful that I get to earn my living doing the very things I love. When I’m not in my studio, I spend my time working on visual art and photography projects.

On Training and Recommendations

I had a fabulous time doing theater all throughout high school. I was fortunate to have a director who had previously run a professional theater company in DC, so he held us to very high standards and I learned an awful lot from that experience. While I was still in Korea, I did the Phase 2 training remotely with Edge Studio in NYC, which I found quite helpful.

I’ve invested in a number of training VO resources from Harlan Hogan, Johnathan Tilley and Bill Dewees over the years to help sharpen the saw. Once I arrived in Chicago last fall, I was fortunate to discover the coaching and demo production services offered by Jeff Finney and Kate McClanaghan at Sound Advice. They are absolutely wonderful teachers, and really helped me to take my VO game to the next level in every regard.

Wow, that is difficult! There are so many to choose from. Right now, I’m listening to Devil in the White City, by Erik Larsen, and I think Scott Brick does a really fantastic job of bringing this story to life. Listening to him, I am instantly transported into late nineteenth-century Chicago. A few other all-time favorites would have to be Stephen Fry‘s read of The Hitchhiker’s Guide to the Galaxy, Fred Sanders‘ reading Robert Greene‘s book, Mastery, and, near-and-dear to my heart, the inimitable voice of Terence McKenna narrating his own book, The Invisible Landscape.

I’d have to say being able to earn a living working with words and making human connections is what I like the most. That, and not having to change out of my PJs or leave the house on slushy grey winter days in Chicago!

I am a huge Apple fanboy, so my favorite credit so far would have to be the promo I did for the Siri rollout in Korea a few years back. It was just for the local market there, but it sure felt amazing to add them to my list.

Lessons to Pass On 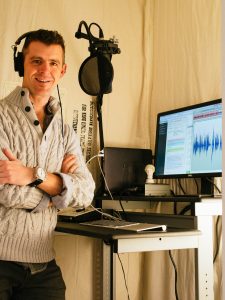 Listen to really good talent and to your own recent work. Really, those are the not-so-secret, not-so-sexy ingredients. The other day I was just reviewing some work I did only three years ago and I was shocked at how terrible it sounds to me now in terms of both production and performance. But, there’s 1,095 days of auditioning, working and listening between me and the VO I was then. I’m sure I’ll feel the same way three years down the road about the auditions I submitted today, too! Of course, I’d recommend investing in some good coaching. I am not on Sound Advice’s payroll, I promise, but I will plug them again. They’re top notch. They do have a great weekly podcast that’s free as can be.

Oh, and do NOT produce your own demo. Get some objective ears and someone who knows the business to help you out.

Lastly, if you’re setting up a studio, it’s all about the acoustic room treatment, not a fancy mic. You can build a totally functional booth in a quiet room using moving blankets hung over a PVC framework. You can get all the recording gear you really need to get started for around $600 these days.

Not very often would you come across a voice talent who does not only have the innate talent, but also the solid work experience (come on he worked those hours!!!) that helped hone his skills and artistry in the last 10 years that made Adam a sought-after and a top-notch voice over talent.

To listen to Adam’s demos, visit his The Voice Realm profile at TheVoiceRealm.com/talent/Adam.Lofbomm