Everything Voiceover with Justin Torres 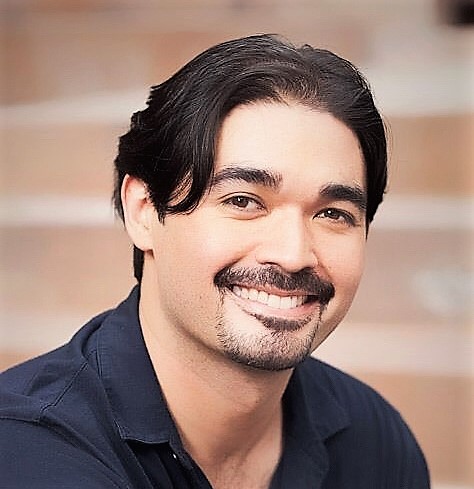 We find that learning from other people’s experience, hearing their stories is one of the most effective way of easing yourself into a whole new career. Hey, even if you are not new to the voice over world, it helps to know that you are not alone and that other voice over talents go through the same challenges, frustrations, joys and successes. Unfortunately there aren’t many quality blogs or podcasts that would constantly feed our need to listen to voice over experiences that would give us not just amusing anecdotes, but also valuable nuggets to use in our everyday VO life. This is where Justin Torres steps in…

Justin has been a freelance professional voice over actor for about 7 years. After finishing his degree in Theatre, he decided to do voice over work.

He started doing one on one coaching with Melissa Gray of the Academy of Art in San Francisco, joined a few pay-to-play sites and set up a modest home studio. A few years later, he moved to New York City to get an agent for his voice over career. He continued his training with Dorianne Elliot of Phantom Audio. And after making his demo, he got signed on with Access Talent that led to him doing voice over for audiobooks.

He has voiced projects for VISA, NBC, Subway, Planet Fitness, Dairy Queen, The San Francisco 49ers, Amazon, Zipcar, and many more. He has also recorded audiobooks for the recent CW show, The Hundred, and been a voice over in Kung Fu Panda: Legends of Awesomeness audiobook series for Simon and Schuster. He is currently working on a big project with PBS.

Though he has done a lot of audiobooks for Access, majority of his income is through repeat VO business or auditions through sites like The Voice Realm.

Here’s more on Justin Torres and his podcast Everything Voiceover…

What got you interested in doing voice over and what got you hooked that you’ve made it your full time career?

“Initially, it was just out of curiosity. I never had anyone tell me I had a good voice for anything. I had a little extra money and just asked some people if they knew anyone who could teach voice over. I started taking coaching sessions with Melissa Gray in SF and bought a crappy mic and started auditioning. What got me hooked was hearing my voice in a pre-roll at an AMC theater. It was so cool to hear my voice in a theater. Admittedly, I was the only person excited and even my friends were like, “Hmm”, but it was pretty cool. Also, every payment early on in my voice over career came with a jump up and down dance in my room.

What’s your favourite thing about being a freelance voice over?

Being able to set my own hours. I wake up when I’m ready and I work when I feel up to it. I also love that if I work harder and reach out further it usually pays off. Treating it like a business and trying to upgrade where you can, has a tendency to pay off in the long run. I love it! 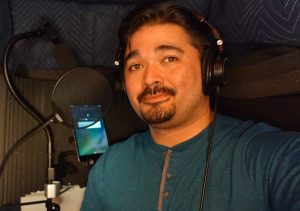 What inspired you to start your podcast Everything Voiceover?

I listened to a lot of voiceover podcasts early on and it wasn’t until I looked at the dates that I realized they were all years old. Some podcasts were talking about past elections! I was also pretty frustrated with the podcasts that were available. I would literally get a notebook and sit down at my desk and listen to podcasts and get any info I could use. Most of the time, I only had maybe 3 things that were useful. I also found that a lot of people were almost trying to get people NOT to do voiceover. Admittedly, sometimes my earlier podcasts were a little ‘venty’, but it was never about the craft itself, it was about the unfortunate side effects of being a freelance voice artist. So, I created this podcast. I stuffed it with as much information as possible. I wanted people to come away with something. Similar to my website, everythingvoiceover.com, it’s just free information and hopefully it will help people.

When it comes to interviews, I love to talk about the equipment and people’s mentors. It brings out a different type of interview. It brings out the grateful nerd in every voice actor. It also is really great to know how people troubleshoot. Every voice actor has to be this journeyman of a million talents and it doesn’t get easier, you just get better at it. I think all voice actors have gone through the similar “hell” of putting up a studio, buying a mic, losing their recordings, editing and having it crash, and a million other things. I always feel a kinship to all hardworking VO actors.

What are the top three common questions your get from your listeners about VO?

How do I protect my auditions? That’s a consistent one. There is prevailing notion that we’re all getting stolen from and no one knows about it. But, just about every voice actor has only a minuscule amount of those stories. Personally, I’ve had one bad client but it was more of a misunderstanding at best. There’s a definite fear of the unknown when you’re sending out auditions, but I keep telling people to not do full auditions. It’s kind of the only real way to do it and I’m thankful that Voice Realm recommends that to all VO actors.  That means a lot.

How do I set up my studio? Everyone is trying to set up a studio. You can only help them so far since everyone’s home is different. Plus, I have to explain that it will be a process.

Do you recommend any teachers? I have countless recommendations of teachers. I usually try to steer people more toward casting directors or someone who can hire them, but there are always people looking for guidance. That’s a huge start for all voice actors. Find the people who you can learn from.

What’s the best advice can you give to a new VO?

Be patient with yourself. It’s a process. You are make-shifting your own university curriculum. You’re going to be learning on YouTube, Skyping with coaches, taking classes, learning software, putting up acoustic foam, buying microphones, figuring out computer problems, and a million other things. You have to be patient, it may take a year before anything comes of it. I tell people, YOU CAN DO IT! But, don’t beat yourself up if you’re not amazing off the bat. I was sent on my first big job by my New York agent, it was booked and I got it. I went in, read for a few minutes, the clients talked for a second, and within that time, the client had hired another VO talent to replace me. It was soul crushing, but, I still kept going, because it’s a process. There will always be jobs. You can and will mess up and you can and will succeed. It’s just life. It’s a process. Have fun and give yourself a break.

What’s can your audience expect next in the coming podcasts?

We’re gonna have Naomi Mercer, an amazingly talented VO actress I met at a conference in San Francisco. She built her own studio, she’s represented by agents everywhere, and she’s just a really down to earth person. She’s got a class on the business of voice over. That’s gonna be great. I’m planning on doing a podcast on streamlining workflow with a few tricks here and there. I also am going to do a podcast series on The Audition Toolbox which is 10 tips and Tricks that every VO actor can take into their daily audition routine that will consistently improve your craft. These are notes that every professional voice over actor receives whether it’s a national commercial or a video game character.

Everything Voiceover Podcast is available 3 times a month on iTunes, Tune In, and Soundcloud. Head to everythingvoiceover.com for more details. Listen to Justin’s latest podcast by clicking here.

And to hear some of Justin’s voice over work visit his profile at TheVoiceRealm.com.