David Gavin, A Voice for All Reasons!

It just felt like all the pieces were being laid out before me by something… Karma? A higher power? Incredible coincidence?

I guess it begins like a lot of other people stories… I’ve always been told throughout my life that I should do something with my voice.

Although I spent a lot of my life as a contractor I always dabbled in commercials and jingles for local companies, whenever the opportunity arose. I’ve also been a lead singer for bands in almost all genres music since I was about 16 years old, along with playing guitar and harmonica.

Shortly before I moved to Great Barrington, Massachusetts, I had decided to take the voiceover a little more seriously and began training weekly and working on a demo with Chuck McKibben, a great mentor who I’ll always owe thanks to for helping me take voiceover more seriously and getting my career started.

When I arrived in Great Barrington I took my first great leap and began doing a weekly radio show on WBCR 97.7 after convincing their board of directors that I knew what I was doing. During that time I was also working at Bard College at Simons Rock and got laid off in the big recession of 2008.

As luck would have it, three weeks before I got laid off, I won $20,000 on a $2 scratch off ticket! That was when I made the decision that I was going to become a full-time voiceover artist.

It just felt like all the pieces were being laid out before me by something… Karma? A higher power? Incredible coincidence?

Using an old MacBook that I borrowed from my brother, I spent months hunting around through all the different audio sites and blogs, trying to find out the best way to get started without completely blowing all my money. After dozens of discussions and endless reading, I finally bought all the necessary equipment including my first iMac. My very first setup was a Blue Snowball, Garage Band and an iMac

I then learned both how to use a computer, how to make a website and everything there was to know about voiceovers… by spending about 16 hours a day, 7 days a week, studying everything I could learn – SEO, html, website building, the best servers, how to use Garage Band and on and on and on!

When I felt like I had a slight grasp on things, I finished making my own demos and joined a couple of freelance sites, and after some time joined a major voiceover site where I actually started getting my first steady work.

I’ve never stopped studying all the nuances of the voiceover industry the rates, the proposals, all of the different voice styles and so on and so on.

Now all the equipment has been upgraded, I finally managed to create my own soundproof booth, I’ve found great sites like The Voice Realm (which has truly become one of my favorite sites to work through) and I’ve got a nice healthy list of longtime clients including some very A list names like Porsche, Milwaukee, Apple and dozens of really great design agencies.

I think the most challenging (I can’t really say difficult) stage in training and progressing as a voice actor was coming to terms with my limitations and knowing what not to audition for.

I spent the first few years of my career, literally auditioning for every single project that came in and at the time they were coming in from two very big pay-to-play sites and four or 5 different freelance sites. This meant anywhere from 30 to 50 auditions a day. My work day was literally 16 hours every day! However, I’ll never regret all of that work since it translated to tons of learning experience and REALLY getting to know my voice, its limits and capabilities. Now, I’d say I average around 10 – 12 auditions/estimates a day.

As for difficulty, I’d say one very difficult part of my career has been determining (and never giving up on) the rates that I’ve set for myself. Using several pay-to-play pricing models, many other successful voice artists’ rates, as well as SAG and AFTRA, I studied hard to find a price range that was both fair to me, fair to my steady clients and fair to the industry. This means having given up hundreds of jobs throughout my career. I’d rather not work, than sell myself short… rip the floor out from under the voice industry and short-change my clients.

I also decided from the start, that I had to be either fully or partially paid in advance… I never finish a job unless I’ve been paid in full when work directly with new clients. Of course once I establish a trusting, long-term relationship, I do lighten that up a bit. I just find it so sad to see some really great talent out there, practically giving their voice away, just for the sake of landing another job and/or getting another review. Value your voice and value this wonderful industry!!

Lastly, the most difficult stage in my career came around 3 years ago, when the love of my life passed away. It was (and has been) incredibly difficult to keep the life in my voice after this tragedy. I’m sure there are others out there who’ve dealt with this in their careers so I just thought it was definitely a struggle worth mentioning. What’s happening in your heart can definitely be heard in your voice, so work got drastically slow for a while.

Probably the most memorable job was very early on in my career and it lasted nearly two years. I provided all the narrations on a geo-tourism site, driven by Google Maps, for Kazakhstan’s Ministry of Sports and Travel.

I worked constantly with a wonderful Kazakh website designer, named Misha Yurchenkov and we spent so much time on Skype together, that we actually became good friends. The experience also gave me an incredible education into the Kazakh culture and language!

Unfortunately, the site has since been removed due to some silly bureaucratic, government intervention.

That job aside, I’d have to say that the most important job I’ve done was the voice over for Western University’s Mustang Athletics 100th Anniversary:

With very few exceptions, every new client that comes my way, says they want the voice from this job. To this day, it blows my mind that one job can have so much impact on a person’s career!

Although I’ve done a number of documentaries and other similar jobs, my dream job is to narrate a major broadcast documentary.

Other than quitting smoking years ago, I can’t honestly say that I do a lot to maintain my voice.

In a way, I believe that my younger years of singing in bands, partying way too much, and too many years of smoking have kind of shaped the voice I have today – deep, a bit raspy and gravelly at times.

I live a much straighter and healthier lifestyle and drink my fair share of herbal teas, but I don’t really go through a lot of the very sensible steps I see many people taking to keep their voice in shape.

I don’t recommend ANY of what I did in my younger years, for the young folks getting a voice career going. In the end I believe it’s “your voice” that will have everything to do with your success (and of course, a lot of hard work and training). 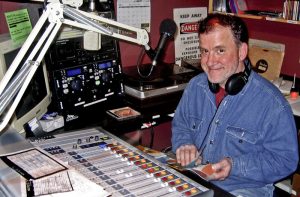 I’d say the main advantage of building your own studio is getting to know all the ins and outs of the equipment that’s creating your voice over. As challenging as it was (and definitely still is) I absolutely love digging into the equipment and finding all the different ways it can shape and mold my voice. This comes in so handy when working on projects requiring multiple voices, or character driven projects like children’s books and video games, etc.

Also, I just love the feeling that I can count on my equipment doing exactly what I expect it to – Sure SM7b, Apogee One, Cloudlifter CL-1 signal enhancer Logic Pro X on a new iMac,

Although I’ve gone through numerous, painstaking website builds and countless hours figuring out the best way to advertise on Google, Linkedin, FB, Bing, etc., I think it really comes down to auditioning, getting jobs, treating all of my clients like gold and always staying in touch without being too intrusive or spammy. Slowly but surely, these jobs and the word of mouth they generate have built a wonderful client base.

Of course, I regularly use and in most of all current social media platforms.

The Industry and The Voice Realm

Working with people from all over the world and taking on the challenge of working on scripts containing words in new languages – that’s what I love the most about the industry.

I always make it a point to do complete justice to every language I work with. Similarly, I love the challenge of working on technological and medical scripts, containing challenging words and terminology. Most of all, of course, I love the fact that it’s my business and it’s always loaded with creative challenges.

Working with The Voice Realm has been absolutely great! I honestly get more work through TVR, than from the other P2P sites I belong to combined!

One thing I’ve always found kind of odd, is that 95% of the work I get on TVR comes from clients coming straight to me, not from all of the auditions I do 🙂

I’m sure there’s something to be learned there, but meantime, I couldn’t be happier!

Since everything hit the fan in 2008, I’ve remained a full-time voice talent and have never looked back. It’s been really hard at times, but it’s been even more rewarding to actually be doing something creative for a living, that I can call my very own.

The listen to David Gavin visit his profile at TheVoiceRealm.com